Total Reconstruction of Ankle due to Sports Injuries 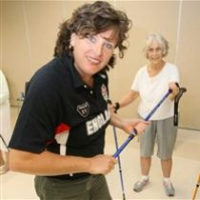 A star track-and-field athlete in high school and university, LaSalle native Cindy Crapper won her share of medals. But, she also suffered her share of injuries, particularly to her right ankle.

“I had total reconstruction of my right ankle because of all the injuries that I’ve had through sport, so it challenges me to walk without a lot of pain,” says Crapper, 45. “It feels like bone-to-bone any time I do any kind of running or sport. Any time I go for a hike, it’s sore for three days.”

Crapper, who competed in the 1980 Pan American Junior Track and field Championships, suffered from such ailments as a broken foot and tendonitis.

She found relief with a pair of walking poles, which were featured at a conference sponsored last June by the British Columbia Parks and Recreation Association.

“So, I started using these poles, and thought ‘my Goodness, I don’t feel it in my ankles,’ ” says Crapper, who is currently a Recreation Services Co-ordinator for the City of Vancouver.”It’s amazing the amount of pressure that’s taken off the ankles by the use of the poles.”

Designed and distributed by a Kelowna, B.C., company, the Keenfit poles offers “a total body workout because you’re using muscles in your upper body,” says Crapper, who has since become a certified Keenfit instructor.

Though they resemble cross-country ski poles, the Keenfit poles redistribute your body’s weight while walking, explains Crapper. “You’re allowing the upper body muscles to be involved in the walk, so every time you put the pole down and use it, it distributes 26 per cent into the upper body and into your core. So it removes 26 per cent off your legs. So it takes some pressure off of the joints in your lower body.”

The poles’ straps allow you to relax your grip and use your palm to help push you ahead, says Crapper, who recently demonstrated the items at a series of clinics in the Windsor area.

They can be used on different types of terrain, including trails and road paths, she adds.

Sheri Simson, who designed the Keenfit poles, says they can help burn off more calories than you would in regular walking.

“Thirty minutes of pole walking is the equivalent of 50 minutes of regular walking,” says Simson, who claims that the poles helped her lose 45 pounds.

“You can burn up to 48 per cent more calories and improve your body posture,” she says.

Back to Real Reasons
About Us
Keenfit Support
Pole Walking in the Media
Copyright © 2020 KeenFit Pole Walking Co.
website by Kelowna Website Design